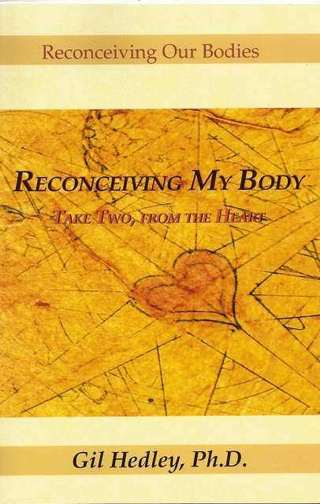 Reconceiving My Body: Take Two, from the Heart is Gil's earlier book, a 147-page paperback — part memoir and religious philosophy debate and a lot of the most out-of-the-box brilliant thinking you’ve ever read about who and what and how we are what we are. There are so many reasons to read this book that it’s hard to know where to begin. But my personal most important reason is fun. It is very fun! Funny, engaging, interesting.

Now the more serious reason: This book may cause you to install a new inner teacher that starts out as Gil’s voice, but quickly becomes your own. I find myself hearing that voice in my head many times during the day —

• When I suddenly start stewing about political matters, I hear Gil/Me talking about the “perpetrator-victim” cycle: When you get into an anger riff, you are casting yourself as a superior victim. You are superior in your rightness, and somebody more powerful (otherwise why would you be angry?) is wrong. Just realizing what I’m doing seems to diffuse my completely counterproductive mind spasms.

• When I start berating my body for being what it is, or loathing some of the sensations of aging, or despairing about my genetic history, I hear Gil: “How you conceive of something has everything to do with how you behave with respect to that something.” If I’m conceiving of my body or my ancestral flaws as a burden, I’m probably not going to respect and be kind to my sometimes sticky joints or be grateful that modern medicine offers solutions that I cannot find by the natural means everybody assures me I should pursue.

• When I start feeling like I’m not enough, when I’m not doing “it” right, I think of Gil’s tumultuous experiences and mistakes, and if he is so clearly wonderful, then maybe I’m okay too. Read More

Dark Energy, a Holographic Reality: a Case for Meditation

Tags: compassionate wisdom, fun, healing, Review
In a fascinating new PBS series called The Fabric of the Cosmos, renowned physicist and author Brian Greene says we've all been deceived. "Our perceptions of time and space have led us astray. Much of what we thought we knew about our universe—that the past has already happened and the future is yet to be, that space is just an empty void, that our universe is the only universe that exists—just might be wrong."

According to the latest science, up 70 percent of the cosmos is made of "dark energy." We know what dark energy does—it drives the expansion of the universe—but that's about it. (I have some thoughts about that in the little video on the right.)

But, for me, there was an even more compelling piece of new information—revealed like a live nude in the middle of a room full of clothed people: the nature of black holes of dark energy has led scientists to propose that "like the hologram on your credit card, space may just be a projection of a deeper two-dimensional reality taking place on a distant surface that surrounds us." Read More
Be the first to comment

Learning to be a good Intervieweeeeeee!


For more information, go to Conversations with Mom.