Is a Loveless, Joyless, Purposeless Life Still Worth Living? 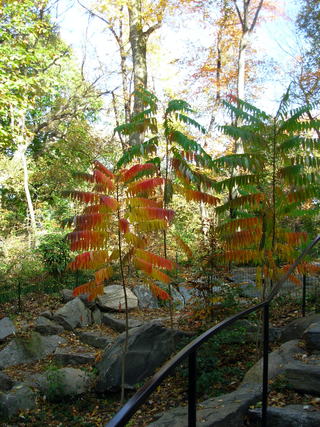 I've never been a fan of what I call the "Bleak School of Literary Book Writing." In my many-times rejected and ignored short story "Metamorphosis or How to Become a Famous Writer or How to Make it Okay to Eat Unlimited Quantities of Candy Corn," the first-person protagonist (a struggling writer) defines this genre as fiction that "ascribes to the philosophy that life sucks, there is no way out, and this is best expressed through endless lists of obscure adjectives, designed to inject just enough intellect and depth to appeal to serious reviewers and get those oh-so-important front-cover praise blurbs."

I've recently read two books in a row that do not fit into this School because they are, in the case of the classic A Meaningful Life by L. J. Davis, filled with humor, or in the case of The Mustache by Emmanuel Carrère, decidedly not bleak because of the high-energy Kafka-esque plot turns. However, both of their endings seem to ascribe to the Bleak School's notion that if you can't get what you want, if you can't control life, if you can't even agree on a common reality, life is not worth living or else it is merely a bleak and hopeless exercise to tolerate.

In my last blog about Herman Hesse's novella Bartleby, the Scrivener, I make the point that I don't believe Bartleby, a man who simply refuses to participate in life, is a victim of his oppressive obligation to make money unhappily, but rather he is walking apathy—a choice. Yes, he has an apparently loveless, joyless, purposeless life, in which (as in the earlier-referenced books) he cannot get what he wants and his death seems to be an attempt to at least control that. But I posit that all these conclusions are a kind of delusion and misunderstanding of what life is and what it is for. And therefore they are, in a sense, false endings.

Many people consider John Williams's astounding novel Stoner to be a bleak book, but on my fourth reading of it, I experienced an ecstatic epiphany.

Likewise, the Pulitzer-prize-winning The Overstory by Richard Powers, about our apparent determination to end life on our planet, left me nearly giddy with joy.

It took a second reading for me to realize the positive message of Ian McEwan's novel Saturday about a horrific day in the life of a neurosurgeon, including a brutal family break-in and a hopeless ending for the deeply disturbed burglar.

All three books seem to me to be telling a truer and more expansive truth than those that ascribe to bleakness.

On his deathbed, John Williams's protagonist William Stoner, a professor in a miserable marriage who has had everything he loves taken away, wonders what he'd expected of life:

A kind of joy came upon him, as if borne in a on a summer breeze. He dimly recalled that he had been thinking of failure—as if it mattered. It seemed to him now that such thoughts were mean, unworthy of what his life had been. . . . There was a softness around him, and a languor crept upon his limbs. A sense of his own identity came upon him with a sudden force, and he felt the power of it. He was himself, and he knew what he had been. (276-277)

After making us know and feel that there is nothing that is not alive, Richard Powers writes in The Overstory:

This is not our world with trees in it. It's a world of trees, where humans have just arrived. [. . .] Trees know when we're close by. The chemistry of their roots and the perfumes their leaves pump out change when we're near. . . . When you feel good after a walk in the woods, it may be that certain species are bribing you. So many wonder drugs have come from trees, and we haven't yet scratched the surface of the offerings. Trees have long been trying to reach us. But they speak on frequencies too low for people to hear. (italics sic, 424)

In Saturday, Ian McEwan's character Henry Perowne collapses after a 24-hour day of life-and-death drama. Determined to talk his family into forgiving the man who tormented them, a man with a deteriorating brain due to Huntington's disease, he finally slips into bed beside his wife:

He fits himself around her, her silk pyjamas, her scent, her warmth, her beloved form, and draws closer to her. Blindly, he kisses her nape. There's always this, is one of his remaining thoughts. And then: there's only this. And at last, faintly, falling: this day's over. (289)

The first time I read this novel, I thought Perowne dies from an earlier chest blow. This time I realized nothing of the sort happened. Like William Stoner, he realizes the truth of what he is—Love. And like Richard Powers's voice as narrator of The Overstory, he accepts that Life is.

Is love possible without connection to another human being? In A Meaningful Life, nebbish Lowell Lake, despite his marriage, never truly connects to anybody, but like Bartleby, he seems to me to be willfully blind to the life all around him: all the people struggling to survive in the slum house he's been renovating. Instead he believes he is so invisible that he can get away with a literal murder, and he apparently does. Is he invisible because nobody confronts him about his actions, or is he invisible because he can't see himself, and therefore he denies the existence of life, and therefore love of life?

In The Mustache, the unnamed protagonist experiences his reality being denied by everybody around him, and rather than let this torture go on, he ends himself. I can certainly relate to his pain at this level of division. Our current culture is playing this out—we cannot agree on what truth is and whether right and wrong are even important.

But I believe there is a truer truth than concluding that life is not worth living. It is that "Love is because Life is." There is no possibility of ending it. Maybe we cannot know what our purpose is. Maybe we will never see fruits from our labors or feel our impact on anyone else or even agree on what is happening, but still "Life is." There is no getting rid of it. Cells live. All matter lives and moves. When it leaves one form, it moves into another: acorn to tree, wakefulness to dream, solid into liquid; matter to gas; ashes to ashes . . . The cells in these forms, including consciousness (thoughts have energy and movement), are alive! So rather than condemn as meaningless that which we cannot understand, why not marvel at the mystery: Life is! We are! If only for a few years, a blip, we exist in this form. Why not marvel at the miracle, understanding—like Stoner, Powers, and Perowne—what we really are . . . and, through the awe, loving—loving life itself?

Interesting. In a similar vein, recently a mourning daughter commented how the death of her father had inextricably altered her sense of purpose. "If we are only to end up in a box, what's the point of striving?" She is not the first to dip her toe into this end of the existential pond, we can agree. I think if one needs a justification for striving-- or merely continuing, as the case may be-- the fact that we wake up each day to our own realities and are usually not satisfied with them is reason enough. Resigning oneself to wafting along on the zephyrs until one no longer awakens, thereby passively accepting one's "condition" in quiet desperation is a tragic waste of life. Indeed as you say, "We are!".

Thanks for the comment, Fred. Grief is a contracting emotion at some of the stages. But, for me anyway, it gave way to a huge expansion after a certain point--for every action there is an equal and opposite, blah, blah . . . You have to be expanded to even see how amazing it is that Life is. And maybe you only get that expanded from the blast-off out of a massive contraction.

I am reminded of Barbara Kingsolver’s recent book, Unsheltered. We sometimes wrap ourselves in expectations - of love, purpose, happiness,
wealth, acknowledgement - and then hopelessness as they elude us. Stripping off all that shelter to “stand in the light” helps us see that we are part of a bigger world, our true shelter. It’s one reason I love driving across the Plains states - when you strip away telephone lines, grain elevators, and windmills, and see the expanse with your mind’s eye, your mind also goes big.
Also, is it really OK to eat endless candy corn? I am relieved.