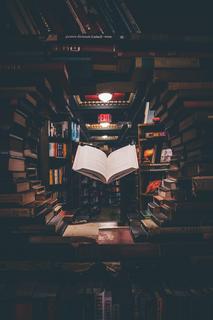 Because I write books, of course I wish more people would read them. But I write fiction, and this morning, after seeing a plethora of fearful social media posts as well as the New York Times's trepidatious headline about Bernie Sanders's New Hampshire primary win ("Tightens Grip on Party's Liberal Wing"), my wish is that people would read more nonfiction.

Because, unless the books are the fabrication of a good ghost writer (i.e., The Art of the Deal, now disavowed by repentant ghostwriter Tony Schwartz), people tend to expose who they really are when they write.

Since the 2016 election, I have read a lot of political books:

In A Higher Loyalty, former head of the FBI James Comey came across as thoughtful and introspective . . . with a fatal flaw that turned off his self-analysis talent: blind righteousness when it came to his decision to talk about an ongoing investigation, despite the fact that it was against FBI policy.

In Hillary Clinton's post-mortem, What Happened, she is warm, funny, dedicated, smart, and unbelievably oblivious when she dismisses, with one line, the Democratic National Committee's rigging of the primaries—because it was legal, albeit completely unethical. She gives not one thought to all the people who felt betrayed to find out what really happened in that instance. It is the same oblivion that allowed her to condemn "deplorables" and promise unemployment for coal miners. For a smart and usually ridiculously controlled person, she could be incredibly flippant.

I like Comey and Clinton—a lot. I understand flaws and have plenty of them. I don't believe either one of them wants anything other than the best for this country, but they have blind spots—a similar tendency to instantly dismiss what they disagree with.

I can't quite make the connection between this and our current widely supported president who not only fabricates a reality when he is displeased with facts, but believes he can change the law at his whim, and, as of late, is being enabled in this by the Justice Department and an attorney general who acts as his personal lawyer. I can't put my finger on the connection between this and the problems of Comey and Clinton, but it seems to me this kind of arrogant oblivion is an escalation of oblivion that is borne when we—all of us—make decisions based on fear: we see things in black and white; we want to be safe so we choose a con man who promises that; we desire a quick fix and perhaps throwing a sledge hammer into our system will accomplish that; or perhaps electing an angry man who demeans others with impunity somehow gives people who are similarly angry a feeling of power. I don't know. And actually it does not matter.

But if we the people continue to make decisions or decide what we fear according to uninformed emotional reactions, fear of the unknown, and the fearmongering of social media, our democracy is lost.

In addition to the Comey and Clinton books, I have read Bernie Sanders's Our Revolution. And I have a very hard time believing that most people—people who want the right to do their best in a fair system—would have any problem with Sanders if they took the time to read his ideas. And certainly they would not be afraid of the label Democratic Socialism. It merely means that we have a system where people—all people—can thrive. There is so much in his book that is comforting and educative. Oh how I wish anyone who spouts unbased fear would take a look.

My first choice this year is Elizabeth Warren. After reading This Fight Is Our Fight, I had no question that she was the right person for our time: she has a compassionate and detailed understanding of how we got to where we are and how to fix it. She understands the correlations between where we live, access to education, and the economy.

I read a book by a conservative a few months ago: Love Your Enemies: How Decent People Can Save America from the Culture of Contempt by social scientist Arthur C. Brooks. In it he says that people want dignity—all of us. And honestly, I think all the Democratic candidates are smart, caring, and dedicated to service and the dignity of all people. So I wish anyone who is afraid would read a book and find out the truth about people before they condemn them because of ill-founded fear.