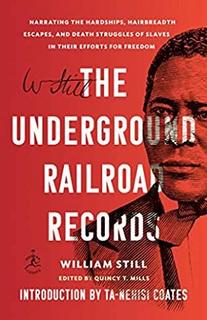 The Underground Railroad Records: Narrating the Hardships, Hairbreadth Escapes, and Death Struggles of Slaves in Their Efforts for Freedom

Imagine it's you: You are kidnapped from your family, stripped naked, shipped like cargo, body stacked on body, in the hold of a ship. If you survive, this transport is followed by being "owned" and worked by other people. Some of the "owners" claim you're not human; others say, "Gee, I'd like to let you go, but I'm too poor and my dead husband left me only you." Or "When you get old enough, you can be free." Or "You can buy yourself for $500." So on some level they know you're a person just like them. But it simply doesn't matter to them.

Imagine you are beaten, raped, have your children ripped away from you and sold like a bag of potatoes. Maybe you escape, only to have to leave babies behind. Or your wife or husband. Or one of them fights tooth and nail, escapes and then comes back to try to rescue you. And then is killed.

All the time, you are a feeling, thinking, intelligent, maybe brilliant, talented, agonized person, and this treatment is condoned and supported by a whole culture that lives fairly well off of your enslavement.

This book of firsthand accounts of escapes on the Underground Railroad, first published in 1872, makes you feel it—as if it's you. And the rage I feel is beyond expression. I got so angry I shook.

Since 1872 these vivid true stories of both the people who suffered and abolitionists and antislavery white activists who tried and died trying to fight for justice have been available. These stories are available to the people who today own properties and businesses that were built with the free labor of enslaved individuals a mere 160 years ago, yet on a recent 60 Minutes segment about the last slave ship, Clotilda, and the descendants of its "cargo" of enslaved human beings, it was reported that a family of rich business owners have absolutely refused to meet with the descendants:

Pat Frazier: They don't want to acknowledge that that's how part of their wealth was derived.

Pat Frazier: And that, on the backs of those people.

Anderson Cooper: What would you want to say to them? I mean, if— if they were willing to sit down and have, you know, have a coffee with you?

Jeremy Ellis: We would first need to acknowledge what was done in the past. And then there's an accountability piece, that your family, for this many years, five years, owned my ancestors. And then the third piece would be, how do we partner together with, in Africatown?

Pat Frazier: I don't want to receive anything personally. However, there's a need for a lot of development in that community.

Anderson Cooper: We reached out to four members of the Meaher family, all either declined or didn't respond to our request for an interview.

The book contains not only author William Still's clear narrative and the first-person dignified accounts and letters of people who had risked everything, committed to freedom or death, but it has a foundation of journalism and legal documents, including the entire Fugitive Slave Act of 1850, codifying slavecatchers' "right" to re-enslave anybody they suspected might have escaped an "owner." The combination of materials makes this a foundational text that has been a resource for many other writers, including Ta Nehisi Coates who wrote the introduction. This is a history that should be read by anybody who wants a fuller picture of this abominable legacy with such strong tentacles that they invade and inform today's current events. Both systemic racism and white antislavery activism have deep roots in our country that are given full exposure. I believe that without understanding what's in this book, there is a tendency—certainly in complacent white people—to miss our complicity in systemic racism by remaining conveniently ignorant of what informs the experience of Black people.

As backup for that last statement, I would like to end this review by quoting from a section of the book called "The Law of Treason, as Laid Down by Judge Kane," from his "charge to the Grand Jury of the United States District Court, in reference to the Slave-hunting affray in Lancaster county," a case of the State against slaves and their cohorts who fought back against people trying to re-enslave them as "fugitives from labor," accusing them of treason:*

It is not necessary to prove that the individual accused was a direct, personal actor in the violence. If he was present, directing, aiding, abetting, counselling, or countenancing it, he is in law guilty of the forcible act. Nor is even his personal presence indispensable. Though he be absent at the time of its actual perpetration, yet, if he directed the act, devised, or knowingly furnished the means for carrying it into effect, instigated others to perform it, he shares their guilt." (page 269)

The name of the slave owner farmer who was killed in the Lancaster event was Edward Gorsuch. Curious as to whether Supreme Court Justice Neil Gorsuch is related to him, I googled and found this interesting article: All Law Enforcement Officers are "Heroes"—Including Slave-Catchers.The author of this article for The Libertarian Institute is deceased, so I wrote to the editor to correct what I believed was a bad mistake—nowhere in Still's book is Gorsuch identified as a police officer. Among all the legal documents, he is called a slave owner and a farmer; the only officer identified was named Kline and he was not killed. I copied my email to the Department of Justice regarding their "roll call of heroes," which includes Gorsuch. The Libertarian Institute's editor replied by quoting the article on his site. The Department of Justice historian replied with a full explanation** which I will paste below with just a smattering of this personal opinion:

Listing a man who was briefly deputized and called a Marshal in order to attack and re-enslave people at Lancaster with no explanation about what he did or why he was even a marshal, with no context, and qualifying him as heroic is a kind of exaggeration and distortion that should be corrected at its source. It is not the truth—the whole truth. To heal, we need truth. William Still tells the truth.

*The defendant freedom fighters in the Lancaster case were found not guilty of treason and this case did an enormous amount to advance the abolitionist movement.

Thank you for your inquiry, which was forwarded to me for response.  The agency's storied past included a few duties that would be considered morally unthinkable in America today, but also had a hand in correcting these same injustices during the Civil Rights and Reconstruction Eras. The U.S. Marshals Service Roll Call of Honor highlights those personnel who died in the line-of-duty.  The criteria for this list and any related memorials, despite the official name, does not differentiate by any other standard than duty at the time of death.  There is no political or moral consideration when considering inclusion.

To answer your specific inquiries on Edward Gorsuch—the submission was some time ago, long before Justice Gorsuch was being considered for the Supreme Court.  We normally do not conduct any extensive genealogical work, so our agency does not know of any connection.  As a clarification, Edward Gorsuch was a special deputy U.S. marshal at the time of his death.  As part of the Fugitive Slave Act, which was a condition of the Compromise of 1850, deputies were required to assist slave-owners (who had to be specially-deputized in order to participate in law enforcement activity).  Another deputy U.S. marshal, James Batchelder, also died while under similar federal orders while the Fugitive Slave Act was in effect.   To ensure historical accuracy and transparency, it is necessary to include both names despite the moral conditions.  In addition to our Roll Call, he would be mentioned by name at the Hall of Honor at the U.S. Marshals Museum (Fort Smith, Arkansas) and the National Law Enforcement Officers Memorial (Washington, D.C.).

While we understand the sensitivity, there is no substitute for historical accuracy.  There was no attempt to conceal Mr. Gorsuch's background or that our personnel were utilized to carry out this duty.  This does not mean our agency would ever glorify the Fugitive Slave Act, but to omit those names who died during this time would not be historically accurate.

I hope this answers your inquiry.